The Doctor is in! 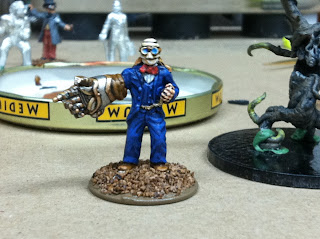 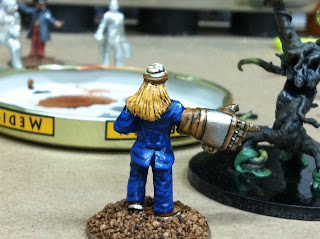 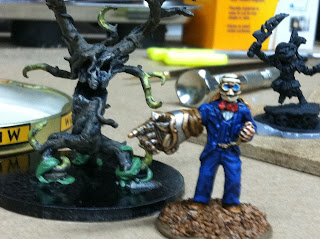 Dr. Justinian Von Coggleson is a strange man to say the least. First you must get past his bizarre appearance - his head covered in wrappings to cover his disfigured face, his blue-glassed goggles and the huge gauntlet on his right arm. Then when you speak to him, you are met by his thick Swedish accent that is further hindered by the wrappings over his mouth. If you can deal with these things however you find a truly brilliant tinker who has the ideas to build the most fanciful machines that would rival the ideas of Dr. Darius Hellstromme himself!
The tale of Dr. Von Coggleson is sad to say the least. At first he and partner Dr. Richard Reeds were working towards some of the greatest inventions ever imagined. However Dr. Reeds quickly realized the ideas and plans were all from his partner. Through jealousy Dr. Reeds decided he needed to make a change. He sabotaged an experiment Dr. Von Coggleson was working on, the first of his many plans that he was attempting to create. Dr. Reeds left Von Coggleson to his work until an immense explosion engulfed the lab and left Dr. Von Coggleson near death. After the explosion Dr. Reeds gathered as many of the blueprints and plans that he could and bid his partner fair-well as he left him to die.
When Dr. Von Coggleson awoke at a Doc Hubbard's office in Abilene he remembered only bits of what had transpired. One thing that did weigh on him was that he was infected with lycanthrope! In reality this 'infection' was a figment of his imagination, but when he was well enough his first order was to concoct a cure for the disease. The 'accident' at the lab left Von Coggleson horribly disfigured and led him to keep his face wrapped at all times - looks at his strangeness were far less biting than the looks he received before he wrapped his wounds. Now he struggles to remember his old plans, though he has plenty of new ones. The one thing that has been brought back to his memory is the visage of his partner turned enemy Dr. Richard Reeds. He doesn't mention it but he longs for the chance to get even with him.
Posted by Rich Mark Borges at 4:53 PM

Email ThisBlogThis!Share to TwitterShare to FacebookShare to Pinterest
Labels: Deadlands